Why does my cat vomit regularly? 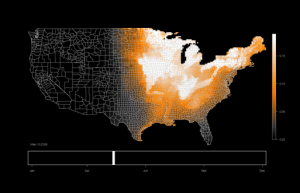 A Romance for the Wild Turkey by Paul Zimmer

Dr. Wahls (doctor, researcher, and sufferer of progressive multiple sclerosis) began studying the latest research on autoimmune disease and brain biology, and decided to get her vitamins, minerals, antioxidants, and essential fatty acids from the food she ate rather than pills and supplements. This is her story about how she used functional medicine and Paleo principles to walk again. She breaks the (Paleo) diet down very simply into which foods provide what the body–and brain–need to thrive.

Do You Love Me?

She’s twelve and she’s asking the dog,
who does, but who speaks
in tongues, whose feints and gyrations
are themselves parts of speech.

They’re on the back porch
and I don’t really mean to be taking this in
but once I’ve heard I can’t stop listening. Again
and again she asks, and the good dog

sits and wiggles, leaps and licks.
Imagine never asking. Imagine why:
so sure you wouldn’t dare, or couldn’t care
less. I wonder if the dog’s guileless brown eyes

can lie, if the perfect canine lack of abstractions
might not be a bit like the picture books
she “read” as a child, before her parents’ lips
shaped the daily miracle of speech

and kisses, and the words were not lead
and weighed only air, and did not mean
so meanly. “Do you love me?” she says
and says, until the dog, sensing perhaps

its own awful speechlessness, tries to bolt,
but she holds it by the collar and will not
let go, until, having come closer,
I hear the rest of it. I hear it all.

She’s got the dog’s furry jowls in her hands,
she’s speaking precisely
into its laid-back, quivering ears:
“Say it,” she hisses, “say it to me.”

“Do You Love Me?” by Robert Wrigley, from Earthly Meditations: New and Selected Poems. © Penguin, 2006.

Indigo Buntings migrate at night, using the stars for guidance. Researchers demonstrated this process in the late 1960s by studying captive Indigo Buntings in a planetarium and then under the natural night sky…

The Brown-headed Cowbird is a stocky blackbird with a fascinating approach to raising its young. Females forgo building nests and instead put all their energy into producing eggs, sometimes more than three dozen a summer. These they lay in the nests of other birds, abandoning their young to foster parents, usually at the expense of at least some of the host’s own chicks.

Some birds migrate at night because the air is calmer and they can use the stars to help them navigate to their destinations. Now here’s the thrilling bit–weather forecasting radar can pick up these aviary flight paths (which can also include bats and insects), so monitoring migration patterns is possible for anyone with access to the internet. The peak of evening migration is between 11:00pm and 1:00am.

A simple and quick tutorial by David La Puma is available online for beginners here, and further FAQ’s can be answered at woodcreeper.com.

The animated map above was created by Cornell University in 2008 to illustrate how weather forecast radar can reveal nocturnal migration.

How to View Nocturnal Bird Migration Via Radar

The Periodic Table of Comic Books

Rose Murphy, “Midnight on the Trail”

Midnight On The Trail

Horses At Midnight Without A Moon

Our heart wanders lost in the dark woods.
Our dream wrestles in the castle of doubt.
But there’s music in us. Hope is pushed down
but the angel flies up again taking us with her.
The summer mornings begin inch by inch
while we sleep, and walk with us later
as long-legged beauty through
the dirty streets. It is no surprise
that danger and suffering surround us.
What astonishes is the singing.
We know the horses are there in the dark
meadow because we can smell them,
can hear them breathing.
Our spirit persists like a man struggling
through the frozen valley
who suddenly smells flowers
and realizes the snow is melting
out of sight on top of the mountain,
knows that spring has begun.

“Horses At Midnight Without A Moon” by Jack Gilbert, from Refusing Heaven. © Alfred A. Knopf, 2005.

This morning I saw the first cloud of blackbirds descending upon Catsilk Mountain. Consequently, this video was shot a year ago by Cherryl Merkin when they advanced through her yard during a late February snowfall.

The redwings are among our earliest spring migrants; the eastern redwing leaves its winter haunts in the southern States before the end of February, reaches New England in March (rarely earlier), and arrives in eastern Canada in April or earlier. (Bent life History)

Male of the Species: Red-winged Blackbird 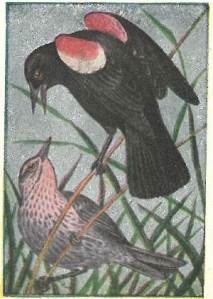 “The Red-winged Blackbird is a highly polygynous species, meaning males have many female mates – up to 15 in some cases. In some populations 90 percent of territorial males have more than one female nesting on their territories. But all is not as it seems: one-quarter to one-half of nestlings turn out to have been sired by someone other than the territorial male.” (The Cornell Lab of Ornithology)

“I have a close but at the same time uncomfortable relationship with the natural world. I’ve always been most at home in the country probably because I was raised in the country as a boy, and I know something about farming and woodcutting and all the other things that country people know about. That kind of work has been important to me in my personal life and in my writing too. I believe in the values of manual labor and labor that is connected with the earth in some way. But I’m not simply a nature poet. In fact, I consider myself and I consider the whole human race fundamentally alien. By evolving into a state of self-consciousness, we have separated ourselves from the other animals and the plants and from the very earth itself, from the whole universe. So there’s a kind of fear and terror involved in living close to nature. My poems, I think, exist in a state of tension between the love of natural beauty and the fear of natural meaninglessness or absurdity.”

Female of the Species

Source Unknown (usurped momentarily from the depths of the public library basement bargain bin, then dispatched and condemned to a life upon a dusty thrift store shelf)