The Leonid meteor shower, named for the constellation Leo, occurs from November 10th to November 20th each year, peaking around November 17th and 18th. Typically one of the most exciting showers of the year, the Leonids produce an average of 20 to 30 meteors per hour. 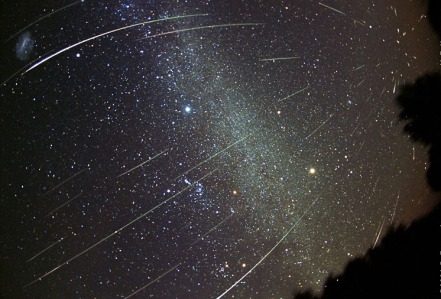 The Leonids are a fast moving stream which encounter the path of Earth and impact at 72 km/s.Larger Leonids which are about 10 mm across have a mass of half a gram and are known for generating bright (apparent magnitude -1.5) meteors.An annual Leonid shower may deposit 12 or 13 tons of particles across the entire planet.

The Leonids are famous because their meteor showers, or storms, can be among the most spectacular. Because of the superlative storm of 1833 and the recent developments in scientific thought of the time (see for example the identification of Halley’s Comet) the Leonids have had a major effect on the development of the scientific study of meteors which had previously been thought to be atmospheric phenomena. The meteor storm of 1833 was of truly superlative strength. One estimate is over one hundred thousand meteors an hour,but another, done as the storm abated, estimated in excess of two hundred thousand meteors an hourover the entire region of North America east of the Rocky Mountains. It was marked by the Native Americans,abolitionists like Harriet Tubman and Frederick Douglass and slave-ownersand others.

Unfortunately for sky watchers, the full Moon on the night of the 17th will make this year’s shower difficult to impossible to see. If you want to try anyway, look to the southeast in the hours just before dawn.