…was sold for the first time on this date in 1928. Up until that time, consumers baked their own bread, or bought it in solid loaves. Otto Frederick Rohwedder, a jeweler from Davenport, Iowa, had been working for years perfecting an eponymous invention, the Rohwedder Bread Slicer. He tried to sell it to bakeries. They scoffed, and told him that pre-sliced bread would get stale and dry long before it could be eaten. He tried sticking the slices together with hatpins, but it didn’t work. Finally he hit on the idea of wrapping the bread in waxed paper after it was sliced. Still no sale, until he took a trip to Chillicothe, Missouri, and met a baker who was willing to take a chance. Frank Bench agreed to try the five-foot-long, three-foot-high slicing and wrapping machine in his bakery. The proclamation went out to kitchens all over Chillicothe, via ads in the daily newspaper: “Announcing: The Greatest Forward Step in the Baking Industry Since Bread was Wrapped — Sliced Kleen Maid Bread.” Sales went through the roof. Rohwedder not only gave Americans the gift of convenience and perfect peanut butter and jelly sandwiches, but he also provided the English language with the saying that expresses the ultimate in innovation: “the greatest thing since sliced bread.” 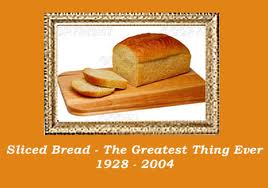